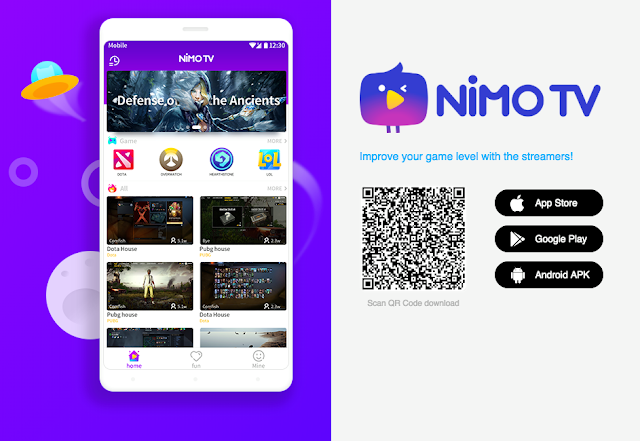 Manila, Philippines – Make way for an epic game-streaming app as NiMO TV officially launches in the Philippines bringing in exclusive partnership with Rules of Survival and TNC Pro Team Dota 2.

NiMO TV, a game streaming app focusing on community interactivity through chat and virtual gifts expands in the Philippines following its successful launch in other Southeast Asian countries like Malaysia, Indonesia, Thailand, and Vietnam.
NiMO TV features a user interface (UI) that streams top-trending games like PlayerUnknown’s Battlegrounds (PUBG), Mobile Legends, Dota 2, Rules of Survival and live online access to esports events and tournaments through its front-page listing.  It also allows game streamers and viewers to chat with one another in its live chatting platform, with this feature NiMO TV aims to create an ecosystem, which involves streamers, viewers, brand sponsors, and celebrity players with hopes to build the streaming experience more interactive and fan-friendly.

NiMO TV continuously strengthens its pool of streamers in both novice and veteran gamers. One testament is an exclusive partnership with the Philippines’ Pride TNC Pro Team Dota 2, a globally recognized squad who cemented its legacy by consistently qualifying and winning different Dota 2 Championships in the World with total earnings of more than 126 Million Pesos throughout their professional career.

One exciting event in the pipeline is the upcoming Rules of Survival – NiMO TV - Philippine Champions League tagged as one of the country’s biggest esports league with a combined pool prize of Php 500,000. A cash prize ranging from Php 25,000 to Php 100,000 awaits the sixth to the first place winners of the event.

With NiMO TV’s expansion to the Philippines, they aim to make a solid presence in the rapidly growing world of esports and game streaming.

NiMO TV is a leading global platform that allows millions of gamers from all around the world to play and broadcast their games to other like-minded players building a community of players, gamers, and fans that drive conversation, and allows peer-to-peer rewards and recognition. Utilizing a high-quality interactive technology, audiences can interact with streamers, and gain access to exclusive esports events and tournaments, along with unprecedented access to the top streamers from across the region.