Friends are not easy to come by. Genuine friends are even harder to find. Hence, making friends is not easy. Therefore, when we have friends we must put in effort to keep the friendship alive.

We can engage with people in various ways to attract and bring them closer to us. Smile is one of the easiest and most contagious methods. People like to see happy faces greeting them. When you smile, you transmit joy and happiness to them. It also symbolizes the gladness in you in meeting them.

Whenever we meet people, always address them with their name. Addressing someone by their name indicates our interest in establishing friendship with them. It shows we are taking interest in them and it will make them take note of our interest in return.

We need to relax whenever we are with someone. This will make them feel comfortable to be with us. Whenever someone is comfortable with one another, they will tend to get closer to each other. Friendship will blossom from here.

When we communicate with the other person, ask questions that will help them to open up and start talking. Nevertheless, do not ask questions that are too personal in nature. This will cause them to feel uncomfortable with our presence. Perhaps, they may even find excuses to walk away.

It is always easy to make friends and maintain friendship if we have common interest. Try to find common grounds where you can share common interest like hobbies, etc. We can spend many meaningful hours or even days engaging with each other sharing knowledge and information on common interest. Whenever we spend meaningful time together, bonding will take place.

Always be generous with compliments. Give compliments when called for. Give it sincerely and people always appreciate positive feedback. Everyone needs feedback to improve and move forward in his or her life and career.

Generally, people like to join to social functions to meet fiends and associates. Make effort to keep in touch with them by inviting them to do be part of any social functions. The functions may not be parties. It can be any charity work, outdoor activities or even family outings.

Overall, we need to make effort to the flame of friendship burning as bright as ever and for as long as possible. Friendship is for life.

Posted by Grace Z. Abonillo at 7:01 AM No comments:

Lola Auring's Place: A Nice Place to Dine and Chill

My best friend asked us in a group chat if we can have a dinner out or just to chill out sometime..

Couldn't actually figured out where to go/stay since I'll be coming from my jog/run/walk session at the Sports Complex.

Told them to have a meet up somewhere near Libis, and they've decided to have some coffee. Arrived a little late, and told them I want to have some rice for dinner and that I can't have some coffee or else i'll stay up way late for later. Then my eyes came across the near place called Lola Auring's Place.

For me, it is somewhat a nice place to dine and chill with family or friends.


Spacious and clean. Just needs more electric fans or ceiling fans when it is humid.

Plus, more choices of pika-pika food as pulutan would be nice for those who loves to have some cold beers..
Sumptuous Pork BBQ. (Php20/stick)
Fresh Grilled fishes. (Php 120-200 depends on what kind of fish)
Silog Meals (Php110)
Drinks and Shakes (40-100)

Will be coming back soon with my girls.. ;)

For they also offered some cool drinks and other foods also..

Follow my blog with Bloglovin
Posted by Grace Z. Abonillo at 10:55 PM No comments:

Great News to all Palaweños, It's now easier to travel to Hong Kong! You don't have to take a connecting flight because starting November 17, 2019, Cebu Pacific is flying from Puerto Princesa to Hong kong (Vice Versa) 4 times weekly (Tuesday, Thursday, Saturday and Sunday) Fare Promo starts now for as low as P1, 888.

“We will be flying four times weekly, two schedules sya, 3:35 ang alis sa Puerto Princesa arrival there is 6:30 that’s for Tuesday, Thursday, and Sunday, yung Saturday flight is leaving ng 4pm and arriving there at 7pm, hindi naman ganun kalayo ang difference natin so  masusulit nyo ang stay in Hongkong once your there, because the flight to Puerto are scheduled at night.” Lim said.
In line with the launching of the said route, fare to PPS-Hongkong is also in promo, lowest base start at P1,888, while Piso Sale is also ongoing for travel period from Nov 17 up until March 28, 2020.

“Before namin buksan ang ruta na to, we conducted studies about it, although we’ve seen a decline sa tourist arrival ng Hongkong, mainly from the mainland of Hongkong but from the rest of the world were good, Hongkong is still fine, in fact Cebu Pacific never reduce our flight frequencies to Hongkong, so we fly from Manila, Cebu, Iloilo, Clark and then etu mag uumpisa tayo nito.” Lim added.
The demand for the PPS-Hongkong route is not only for tourist, one major factor is the Overseas Filipino Workers to which some are Palawenos, opening the route a month before Christmas is a perfect timing, Honkong being a largest aviation hub is also a gateway for westerners to Asia, and having the said flight is bringing them directly to world’s best island.
“We’ve seen there is a demand not only for tourist and business, even for OFW’s in Hongkong, would be easy for them to fly back home in Palawan, were opening it right before Christmas para mahabol na nila kung uuwi sila ng Christmas dito.” Lim explain.
Aside from the said route, Cebu Pacific also announce Cebu-Busuanga route twice weekly, plus the all-new Halal certified meals they serve on board that already start this October.
Cebu Pacific has four domestic routes in and out of Puerto Princesa, to and from Manila, Cebu, Iloilo and the newest one is Clark starting also by November 17.  They started operating in Puerto Princesa in the year 2003 with the PPS Manila route, they hold the largest capacity share flying out and in of Puerto Princesa compare to other airlines.


By end of 2019, Cebu Pacific forecast in flying about 1.1 million passengers in out of PPS, upgrading of their aircraft is also ongoing as they committed to have 1 modern aircraft monthly in order to open more routes, so far they have a total of 74 aircraft and airbus, they target to fly 200 million passengers come 2020. 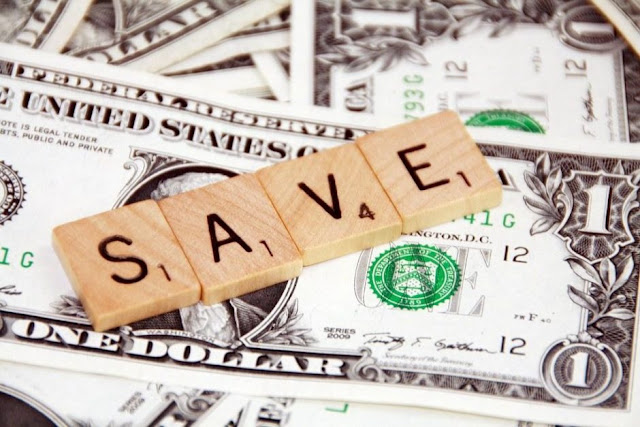 But if you are guided with the right principles and reasons in deciding to live a frugal life, you would never go wrong.

If you have decided to live frugally, no need to be worried of insults. Keep your head up high.  And keep your focus through these tips.

1. Eating Out - Having gimmicks with friends on a Friday night is fine if you do it once in a while. But this can be expensive if you add them up at the end of the month.

2. Clothing - Naturally, if you are the kind of person who adores signature and designer clothes, do not expect that there will be something left of your take home pay. Instead of being trendy, wear clothes that can easily be matched with your other clothes.

3. Own Home - If you are planning to move out and find a place to settle, do not be overwhelmed by the excitement, instead be practical. As a start, buy a smaller house or try other ways like rent-to-own, do-it-yourself arrangements, and owner financing.

4. Buying Your Own Car - Shy away from sports cars or SUVs. Just stick to your purpose of buying a car which is to transport you anywhere you need to go. Check out also program cars like a new car warranty. Maybe this is not just the best time to replace your car with a new one.

5. Shopping for Groceries - As much as possible do not go with items that are branded. Choose non-brands and try looking for items on the highest or lowest shelves for best prices. Grab the opportunity and shop during sales or use coupons.

6. Family Out - There are inexpensive ways to bond with your family and be entertained like going to libraries, local parks, malling, picnics, visit friends and local church.

7. Buying School Supplies - Stock school supplies at home and do not buy anything fancy.

8. Be contented with what you have and try to live within what you earn.

9. Plan your Child’s College Education - Teach them the ways to be independent and self-supporting by encouraging them to apply for scholarships and “on campus jobs”.

10. Be Aware of your Financial Limitations

11. Anticipate your Failures by Planning - Have always a budget plan so you would avoid impulsive buying.

So, here we are situation at Sequoia Hotel. Heavy rain pouring. Can't leave the hotel for we are having a hard time getting a taxi and can't even book at Grab..

Hence we decided to try this resto in the hotel, called Ombu Kusina. We heard they were serving authentic Filipino Dishes.

The place looks so classy and fresh. At first I don't really like it here, by mere looking at it you can say that the rates of the food here are not for the "pang masa" type/kind. 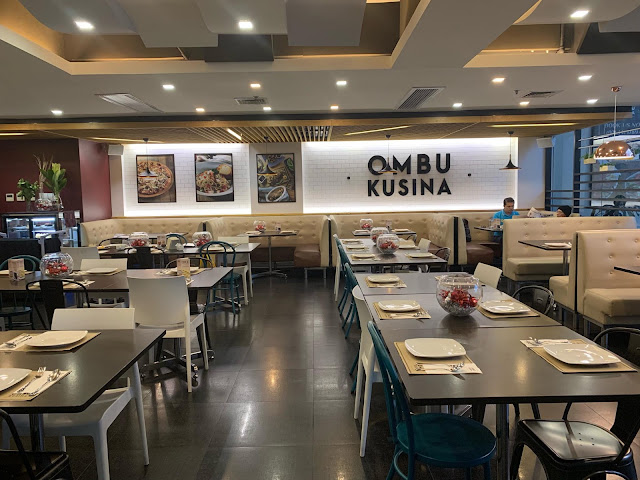 We tried their Pork Sinigang and Laing. Sorry no photos taken due to the fact that we're already hungry and didn't bothered photographing the food, until we realized we wanted to blog about it..

But anyways, the sinigang was good, laing was just fine just that it's not so authentic as I've thought it was. Over creamy and a bit bland for my taste..  ;)

As you can see on the above photo, Laing was half filled still. But I loved the idea of having extra bowl of soup for the Sinigang in Miso Fish.. ;)

We were able to try their famous frozen Brazo de Mercedes.  The slice costs Php 180.00. It's superb! Delicious as it is from the reviews. The frozen ice cream part really compensates the sweet and fluffy taste of the cake.  A must try! 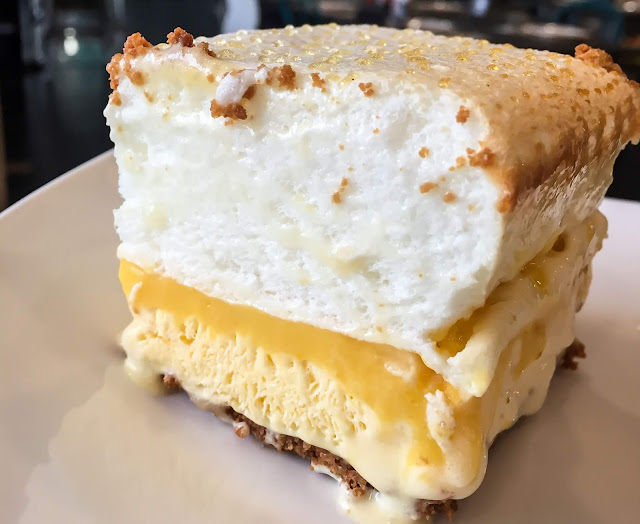 Posted by Grace Z. Abonillo at 9:44 PM No comments: